006. Why Wiseman Would Be More Effective At The 4

James Wiseman. The Unicorn. In 2020, this unique prospect was drafted by the Golden State Warriors with the #2 pick. Standing tall at 7’, the Warriors, who lacked a Center with height, used their pick on this 19 year old at the time to help fill out their roster. Wiseman was a risky draft pick with only 3 college games under his belt. The Warriors understood the risks, hoping that he could have some level of contribution right away, but ultimately knowing that he will be a long-term development project with a really high skill ceiling. This man just oozes potential. He averaged in college 19.7 PPG and 10.3 RPG, and although it was only three games, you can see that he has the physical gifts, the work ethic, and the right attitude to become a true ballin’ star in the future.

Could Wiseman have played better? Obviously. Does Wiseman have a lot of room to improve both physically and mentally? Most definitely. But could it be both the short-term and long-term interest of all parties involved for Wiseman to be playing at Power Forward? Maybe. Is it possible for the Dubs to be utilizing Wiseman’s strengths better? Potentially.

Now to start, what are the main differences when comparing Power Forward and Center? Centers tend to be a much more physical position: fighting in the paint, pushing for rebounds, and scrapping for points. Power Forward also has a lot of physicality involved, but they usually are a little smaller and tend to play a little farther out at the high post. Caveat: In today’s era of basketball, positions are a lot less defined. Centers can stretch the floor. Point Guards can be grabbing rebounds. But even then, one can say that the general trend is that Centers are bigger than Power Forwards.

I don’t want to add too many disclaimers into this post, but I feel this one has to be said: Wiseman is perfectly capable at playing and excelling at Center. He can post up. He has the height to play in the low post. And this summer he has been seen with a definite size increase and looking to have packed on some muscle. But is it optimal? I have three main points I want to throw out there as to why it’s worth considering putting Wiseman at PF:

Size
Wiseman is tall. And the Warriors desperately need that height down low. While true, Wiseman’s size compared the other great bigs don’t seem to matchup. I do think with Wiseman lifting weights and still being young, he can grow to become the Center that GSW needs, but as of the end of the 2021 sesason, I just don’t see it. Here are the comparisons I made, sorted by weight: 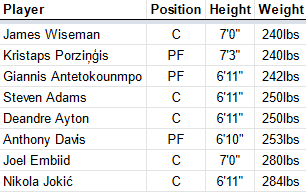 As you can see, Wiseman as a big man tends to be on the smaller side measuring at 240lbs. Admittedly, I chose some of the greatest Centers in the league to compare to because I want greatness for James, not just serviceability. There are still great Centers in the league that are comparable to Wiseman, such as Clint Capela, who measures at 6’10” and 240lbs and of course GSW’s very own Kevon Looney with 6’9” in height and a small 222lbs in weight. Capela may have the same weight as Wiseman, but with 2 inches less in height, it also means he has quite a bit more muscle to make up for the difference.

In terms of size comparisons, he reminds me of Porzingis the most. He has that lanky form and the somewhat similar height. Even as Wiseman gets bigger, both from a size standpoint and a playstyle standpoint, I like to compare Wiseman closest to Anthony Davis, which we’ll cover more later on.

As we go down the Centers list, we can see that Wiseman has the height, but he has ten pounds less than the shorter Steven Adams, and at least 30 pounds less than the 2021 MVP Winner and Contender Jokic and Embiid, respectively. The size difference is no joke. Watch as Wiseman tries to grab the rebound from Ayton:

While there is a lot to be desired from a technique standpoint as well, we can definitely conclude that James isn’t the king of the paint by any means. He will definitely be bullied down there, which brings me to my next point.

With the size difference at Center and being primarily played in the low post, it means there’s a ton of physicality down there. Pushing, shoving, boxouts, you name it. While I do think Wiseman is capable of handling the pounding in the paint, it will cause some wear and tear on him in the long run, especially if he doesn’t gain some weight. It can even be a cause for injury which we have seen in both Porzingis and Anthony Davis. AD has even mentioned that he prefers to play PF over C, both because of preference and for safety.

With Wiseman’s current size, he might matchup better as a tall dominant PF that can also stretch the floor. Again, there are a lot of similarities to him with Porzingis and AD, which brings me to my last and final point.

Playstyle
Wiseman, Porzingis, Davis. All capable of playing Center. All are great at driving, posting up, and finishing.

But based on preference on how they play their offense, and their unique ability to shoot the ball at a decent clip, they tend to prefer the PF position as we mentioned earlier in what AD said. In the 2021 season, Wiseman shot 51.9% from the field and 31.6% from 3, which isn’t half bad. Anthony Davis thrives at being able to choose how they beat their matchup by being able to both go low, or stretching the floor when needed. Wiseman is the same, where instead of always resorting to physicality to get a bucket, sometimes going for a nice midrange jumpshot to solve his problems:

or just straight up going for long range. I like what I’m seeing here:

Also just in case I have been too hard on the young man, the dude can block too:

I’m making all these comparisons to AD because I think we should use the league’s past to maximize the future. Learn from what we’re seeing with AD, and while Wiseman should be switching both from PF and C, having other alternatives for the big man may be the key to Wiseman’s success.

Conclusion
Wiseman is young. There’s a lot of things that can happen in the coming years that can change the situation. I won’t say I know what’s best for both the Warriors and Wiseman himself, but I will say that with what I’ve seen in the past and with Wiseman, it is definitely at least worth heavy consideration of Wiseman as a Power Forward.

Thanks so much for reading!